Description:
The body was of a wooden structure, on which the body panels were nailed. It was based on the 2-seater "Tourer" (Torpedo) but with a rounded rear end was enlarged to be more spacious. The car had only one door located on the passenger side and opening to the front; reversed on the right-hand drive cars. The door size was increased by 7cm in respect of the model T2. The door hinges were not visible. A tensioned conical bolt reduced vibrations of the door. The spare wheel was mounted on the driver’s side (inside out) and fitted with a tyre upon delivery.

The driver's seat was fixed. The passenger seat mounted on two cylindrical rails could be moved back and forth. At the front, under the dashboard, was a folding jump seat that could be up (mounted) when the passenger seat was in the rear position. The luggage compartment was located behind the driver's seat, accessible from the top and closed by a lid.
A body rail made of aluminium profile bordered the upper edge of the body and was painted black. The running boards were made of aluminium reinforced with long grooves. They were black in colour; the top of the grooves was polished. Wings and frame cover were made of black enamelled sheet metal. All four wings were reinforced by bordures.
The headlamps (bowls: black paint; rims: nickelled) were connected by an adjustable nickel-plated cross bar. Apart from normal road light there is also the possibility to switch on a parking light.

Door storage pockets were fitted in the door and alongside the driver. The floor covering was brush carpet. The polished and engine turned aluminium dashboard was simple, with only an ammeter and a headlight/ignition switch.

The model T3-1 was based on the type C3 chassis with a wheelbase of 2.35m. The running board of aluminium is 170x980mm. The windshield from DUVIVIER [L139] could be inclined and fixed in any position. The pivot point is in the lower third of the frame.
The convertible top was openable around a single axis and covered with waterproof fabric. The hood hoops were steel.

According to the extrapolation from the data base of the register, this model had a limited production about 6000 pieces; the customers did not like the discomfort of the folding seat. This model has since been improperly called "Faux Trèfle" (false clover leaf) by collectors. 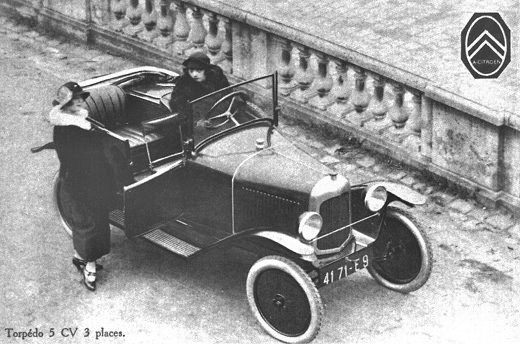 In the beginning the car was equipped with high pressure tyres (700 x 80) from MICHELIN. From June 1924 on all cars were equipped with balloon tyres "Comfort" (715 x 115) and the convenient rims [L386]. For logistical reasons black was used as standard colour for the rims.