Description:
The body was of a wooden structure, on which the body panels were nailed. The rear end was similar to that of the "two-seater Torpedo" T2. The car had only one door located on the passenger side and opening to the front; reversed on the right-hand drive cars. The door hinges were visible. A tensioned conical bolt reduced vibrations of the door. A T-shaped door handle was mounted on the outside. The spare wheel was mounted on the driver’s side (inside out) and fitted with a tyre upon delivery. 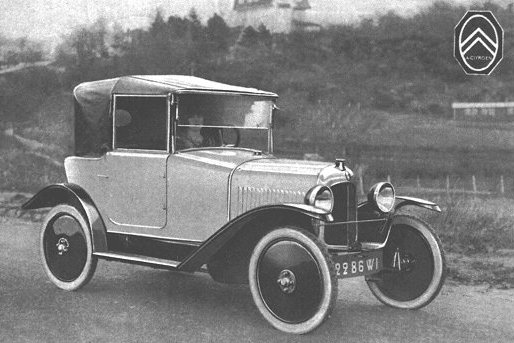 A comfortable bench seat offered enough space for two people. At the back of the car is a boot, accessible from the top and fitted with a lid opening upwards. Furthermore, there was a small compartment (glove compartment) with a deck lid behind the seats. 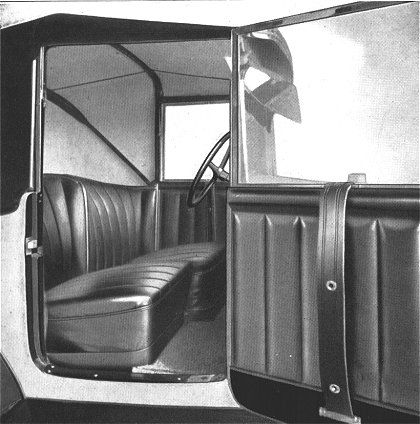 Wings and frame cover were made from black enamelled sheet metal. All four wings were reinforced by bordures.

The headlamps (bowls: black paint; rims: nickelled) were connected by an adjustable nickel-plated cross bar. Apart from normal road light there was also the possibility to switch on a parking light. A body rail made of aluminium profile bordered the upper edge of the bodywork and was painted black.

The floor covering was black brush carpet. The windshield was in two parts, the upper part opening towards the front. The pivoting point was in the upper third of its frame. The two side windows could go down into the interior of the door and were operated by a strap. These windows could also be kept clipped in the high position when the hood was open. When the door was closed, the side of the window fitted into a holder on the windscreen pillar.

The hood closed hermetically; it was made of imitation leather, with a fabric liner, metal hoops and a spreader device. The roof could be opened and closed from the inside. Seats and interior are covered with leatherette.

The Coupé (Cabriolet) is basing on a chassis type C2 with a wheelbase of 2.25m. The bonnet is provided with sixteen louvres on either side. The engine was supplied with a magneto ignition. The polished and engine turned aluminium dashboard was simple, with only an ammeter and a headlight/ignition switch. On the short wheelbase chassis, the lid of the luggage compartment which was larger than on the T2 model, did not allow the fitting of the external luggage rack. The passenger seat was slightly narrower for ease of access. 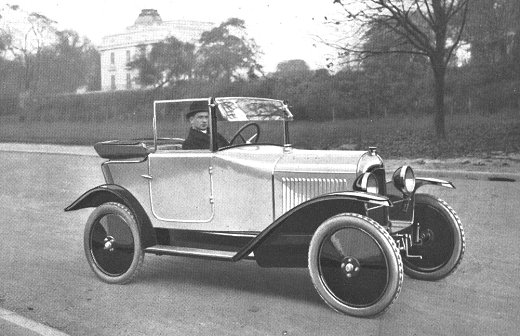 The running board measures 170x880mm. The wooden frame construction was supported at the rear by two side-mounted bent U-profile. The 700x80 beaded edge Michelin "Cablé" tyres were inflated at "high pressure", (4 to 5 bars). 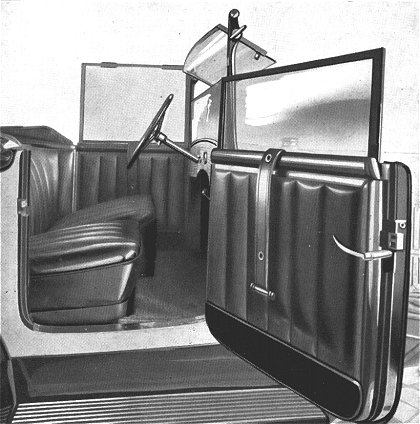 Initially only the yellow colour (between a straw yellow and a pale "grapefruit" yellow) is available, according to [L37] from March 1923 brown "havane" and later (from summer) blue (canon) is added. Rims, wings, lamps etc. are black. Radiator grille and lamp rims were nickel plated. 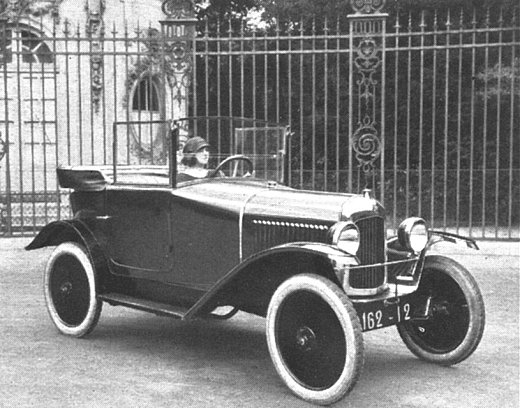 In autumn 1923, the short chassis type C2 was lengthened by 10cm from 2.25m (7 ft 5 in) to the long chassis type C3 2.35m (7 ft 9 in) and reinforced by an additional crossbar which protruded from the rear deck and supported the rear of the body. The rear reinforcements were no longer necessary. The bodywork also increased by 10cm in length, which is visible on the bigger distance between sparewheel and rear wing. The running board measures now 170x980mm. From that time on transversal friction shock absorbers (Hartford type 100) were fitted on the rear axle [L78]. Many customers having complained, according to the dealers information of March 1924 [L172], the deck lid was modified identically to that of the Torpedo T2.
The dashboard was now made from mahogany. The cover strip above the dashboard and the strips under the side windows have friezes. The first version had a single decorative line but this was subsequently changed to two lines. The interior was offered for bordeaux-red (maroon) cars in red leatherette, for brown (havane) cars in brown, and for blue (canon) cars in black. Door storage pockets were fitted in the door and alongside the driver.
From June 1924 on all cars were equipped with "Confort" balloon tyres, introduced by Michelin, and the corresponding beaded-edge rims (715x115) [L386]. For logistical reasons black was used as standard colour for the rims.
The cooling system was improved by the addition of a fan from June 1925 [L61]. 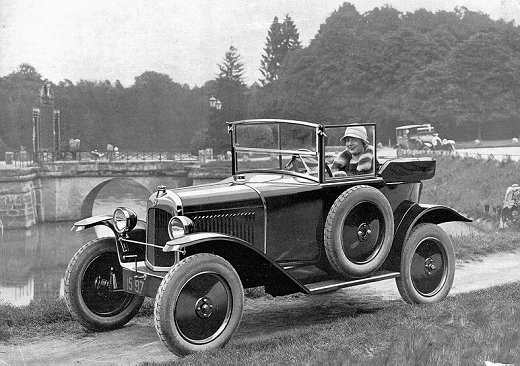 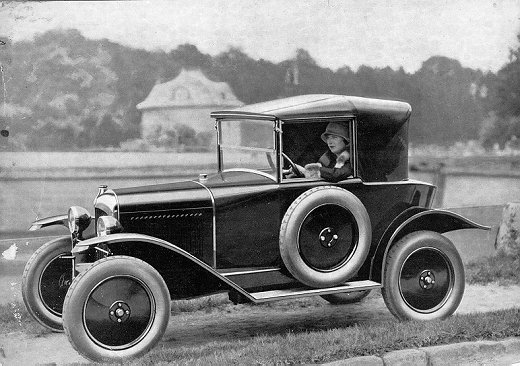 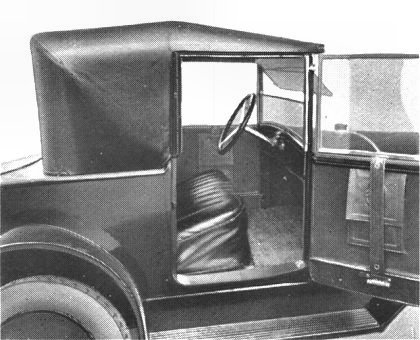 The passenger seat was no longer back sprung. The yellow paint was replaced by bordeaux red (maroon) and dark blue (bleu canon). The car remained available in brown (havane).

From February 1925, DUVIVIER's windscreen system was replaced by the Citroën system. Visually, apart from the window holder and handle, there were no major differences, but they were not interchangeable mechanically. At the same time, the convertible (Cabriolet) was equipped with deep-drawn (called "round") wings and from July 1925 with a new rear axle with oval differential housing. 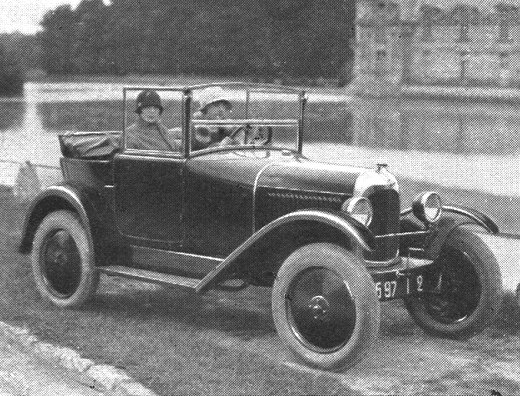 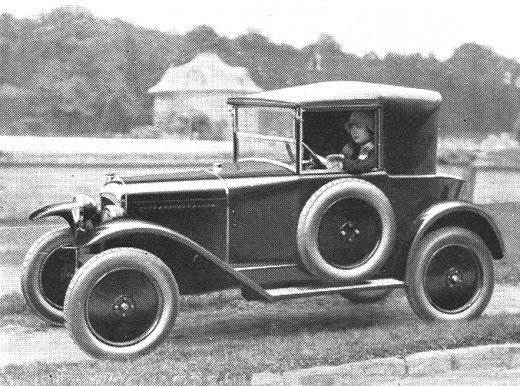