Description:
The body was of a wooden structure, on which the body panels were nailed. This was covered by a fixed roof padded with leatherette and supported by the windshield brackets. The car's front end was that of the model T3. 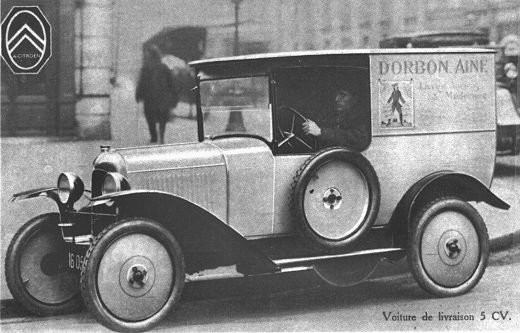 The car has two individual seats covered by of imitation leather. The driver's seat is fixed, the passenger seat can be removed. Door storage pockets were fitted in the door and alongside the driver. The floor covering was a rubber carpet. The dashboard is made of black painted sheet metal and equipped with an ammeter and a headlight/ignition switch. The body rail (covering the door and other parts) are made of aluminium profile and painted black. The windshield from DUVIVIER [L139] was in two parts, the upper part opening towards the front.
The utility area at the rear was equipped with two swing doors. In the front passenger partition was a sliding door allowing carrying loads of 1.5m long. The interior dimensions of the loading space is: length 0.75m, width 1.07m, height from floorpanel 1.02m. The payload is 125 kg. 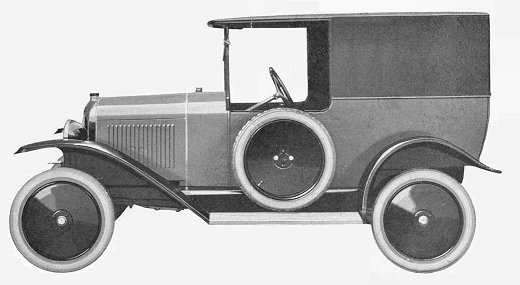 The vehicle has only one door located on the passenger side and opening to the front; reversed on the right-hand drive cars. A door on the driver's side was not mentioned in the vehicle description [L55], so that it was probably later upgraded on customer request. The door hinges were not visible. A tensioned conical bolt reduced vibrations of the door. The spare wheel was mounted on the driver’s side (inside out) and fitted with a tyre upon delivery. The running boards were made of aluminium reinforced with long grooves. They were black in colour; the top of the grooves was polished. Wings and frame cover were made from black enamelled sheet metal. All four wings were reinforced by bordures.
The headlamps (bowls: black paint; rims: nickeled) were connected by an adjustable nickel-plated cross bar. Apart from normal road light there was the possibility to switch on a parking light. The delivery van was based on the type C3 chassis with a wheelbase of 2.35m. The running board of aluminium measured 170x980mm. Both sides had curtains of waterproof fabric; the curtain on the door opened with it.

Initially the delivery van was fitted with high-pressure tyres (700x80), then from June 1924 with low-pressure tyres "Confort" (balloon tyres) and the corresponding rims [L386]. The beaded edge wheel dimensions were then 715x115. For logistical reasons black was used as standard colour for the rims.
The cooling system was improved by the addition of a fan from June 1925 [L61]. 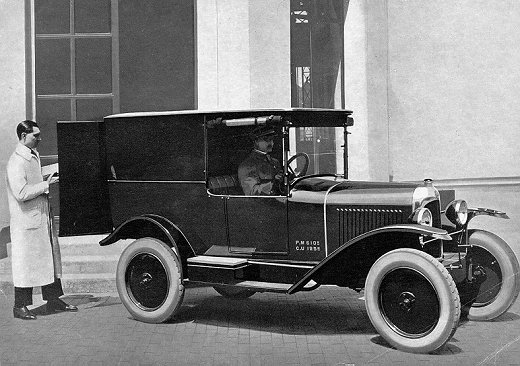 The delivery van was supplied by the factory only in brown (havane). Rims, wings etc. were black.